This publication aims to be a showcase that can serve to overcome the superficiality of a look at those who will visit Grosio, on this and other future occasions. We hope to accompany the visitor to the discovery of a rich and fascinating historical-artistic reality.

Grosio is defined as an original and particular piece of the variegated Valtellinese mosaic. Authenticity, joviality, frankness are and try to survive as characteristics that act as a social glue. Those who enter the village are welcomed by the hydroelectric plant that exploits the waters coming from Valgrosina, a mountain picture with multiple colors and landscapes. The two medieval castles rest on the plants built with an original architectural style, alongside the largest engraved rock in the Alps on which the hieroglyphic signs of primitive life in these places are imprinted. Looking towards the town, the façade of the Parish Church of San Giuseppe appears majestic, alongside the historic Villa Visconti Venosta surrounded by a large park. Entering the town, its hamlets and then into the side valley or the slope that leads to the Mortirolo pass, you can get to know other precious pearls that we only partially present in this space.

The first signs that testify to strong human activity in these places date back to the Bronze Age. Presumably, some findings, thanks to the archaeologist Davide Pace, in the bumps that flank the castles that dominate the access to the town, date back to the late Neolithic. The older of the two fortifications dates back to at least 1150 as the property of the Bishop of Como and then passed and became available to the Venosta family until the 1500s, a time when the "castrum novum" was also built. The prehistoric finds and castles can be visited with the expert guides of the Rock Engravings Park which welcomes visitors. 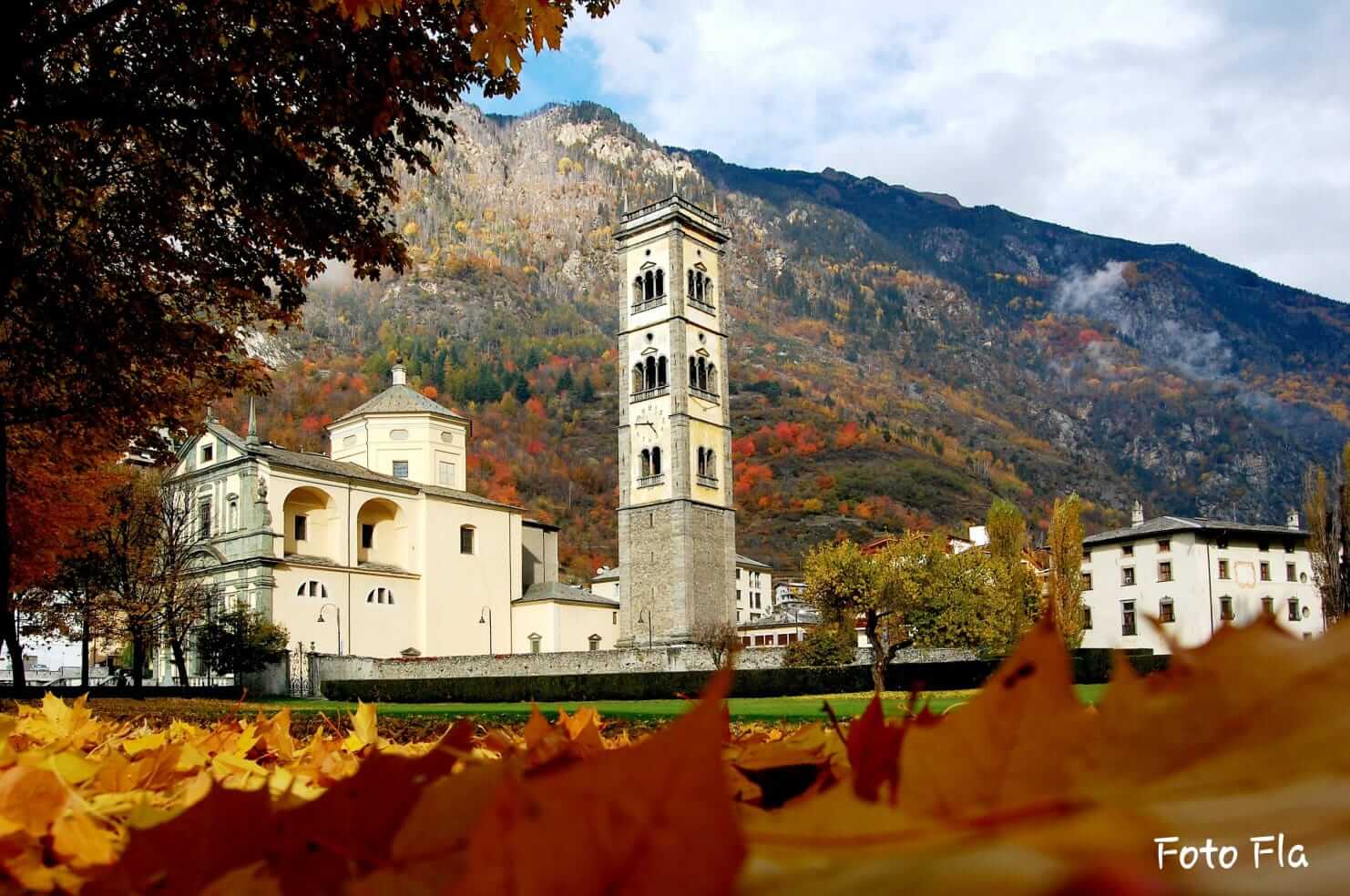 It dates back to the 17th century and has been a parish church since 1818. It is accessed through imposing stairways that lead to the churchyard surrounded by elegant balustrades. The façade, with local green stone pilasters, is flanked by the imposing bell tower 65 meters high which contains the bell concert made with 8 bells by the Pruneri Foundry which operated on site until the mid-1900s. single nave with chapels on the sides adorned with stuccoes of Baroque origin and precious paintings. 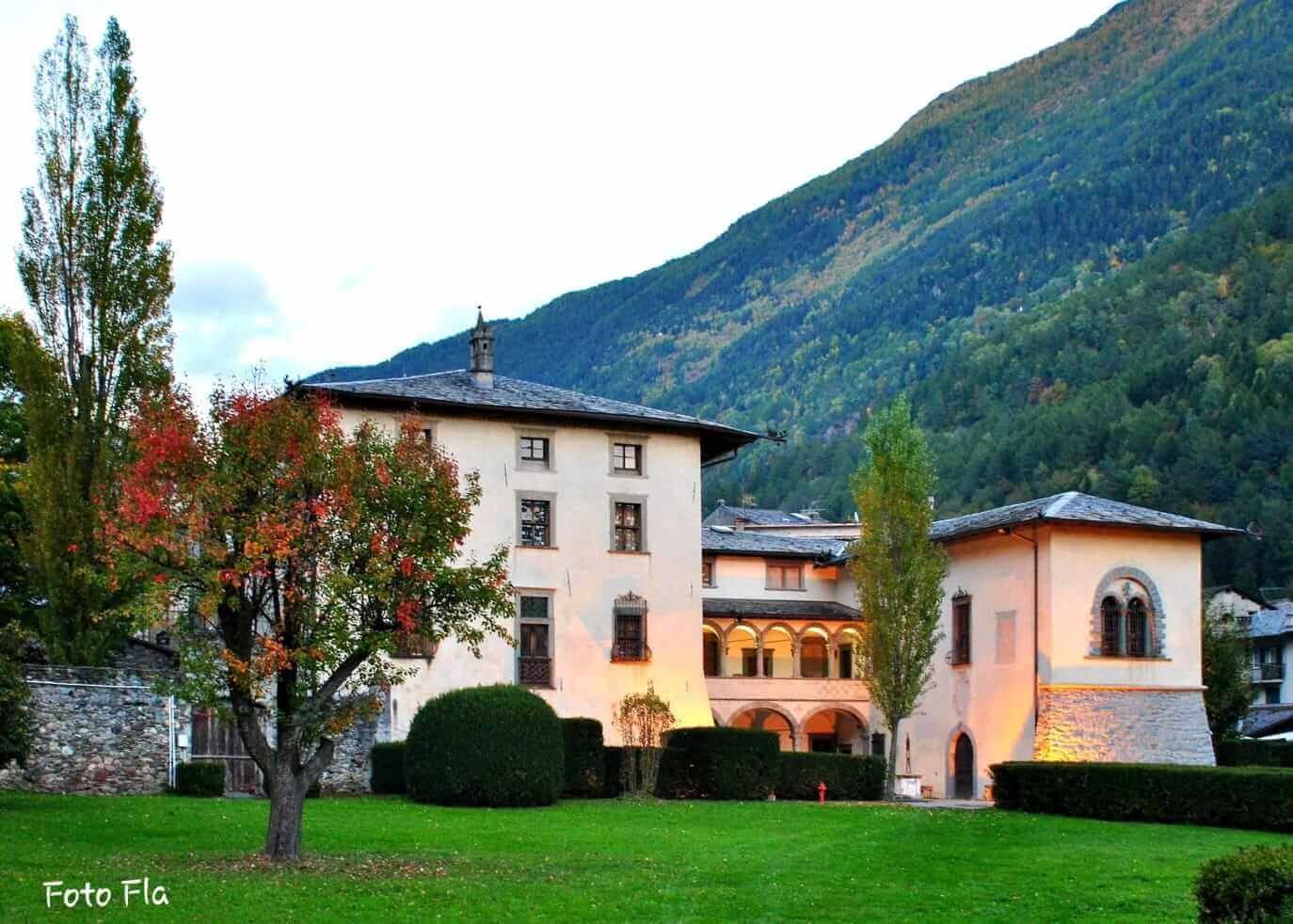 It is located next to the parish church surrounded by a large park. The building has a central body with a four-arched portico and two two wings. The oldest part on the left built in the seventeenth the more modern part built in 1800. The whole property is enhanced by a museum that tells the story of the Visconti Venosta family and thus of the Risorgimento in which its members were protagonists. The villa was the summer residence of the noble family whose most famous member was Emilio Visconti Venosta, a close collaborator of Cavour and foreign minister in six governments following the unification of Italy. The Villa was donated to the Community by the Marquise Margherita Pallavicino Mossi, widow of Giovanni Visconti Venosta, the last member of the now extinct family. 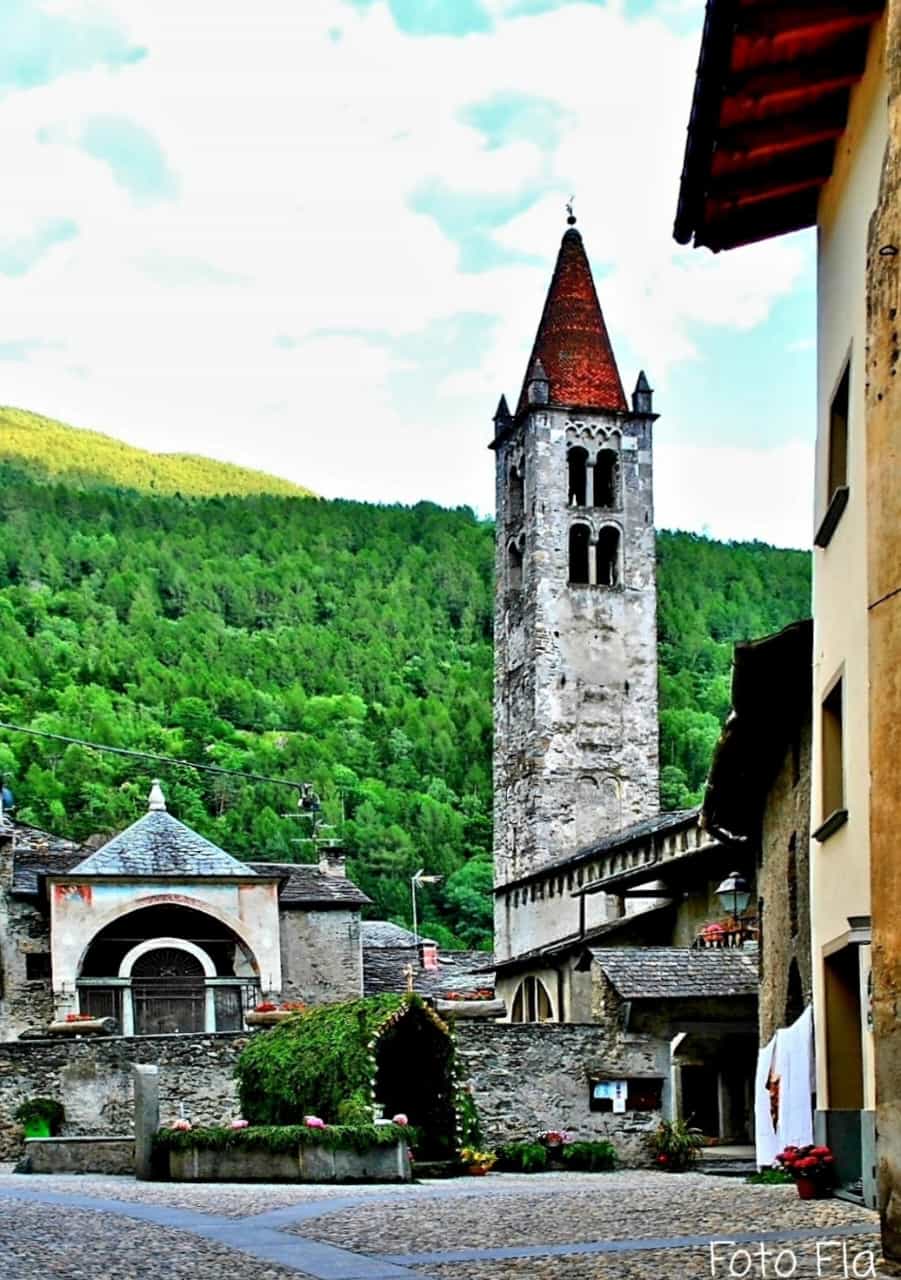 Continuing to the right into the alleys of the historic center is this sacred building of the thirteenth century, a late medieval Lombard jewel. It has maintained its original appearance and is located in the center of a square that used to be the municipal one, with a valuable octagonal fountain and next to it is the Ossuary and a green space that once housed the town cemetery. Inside there are numerous frescoes, very delicate and evocative, restored and rediscovered in the last years of the 1900s after more than one hundred years of oblivion. some of them are attributed to the local artist Cipriano Valorsa known as “Raffaello di Valtellina”. 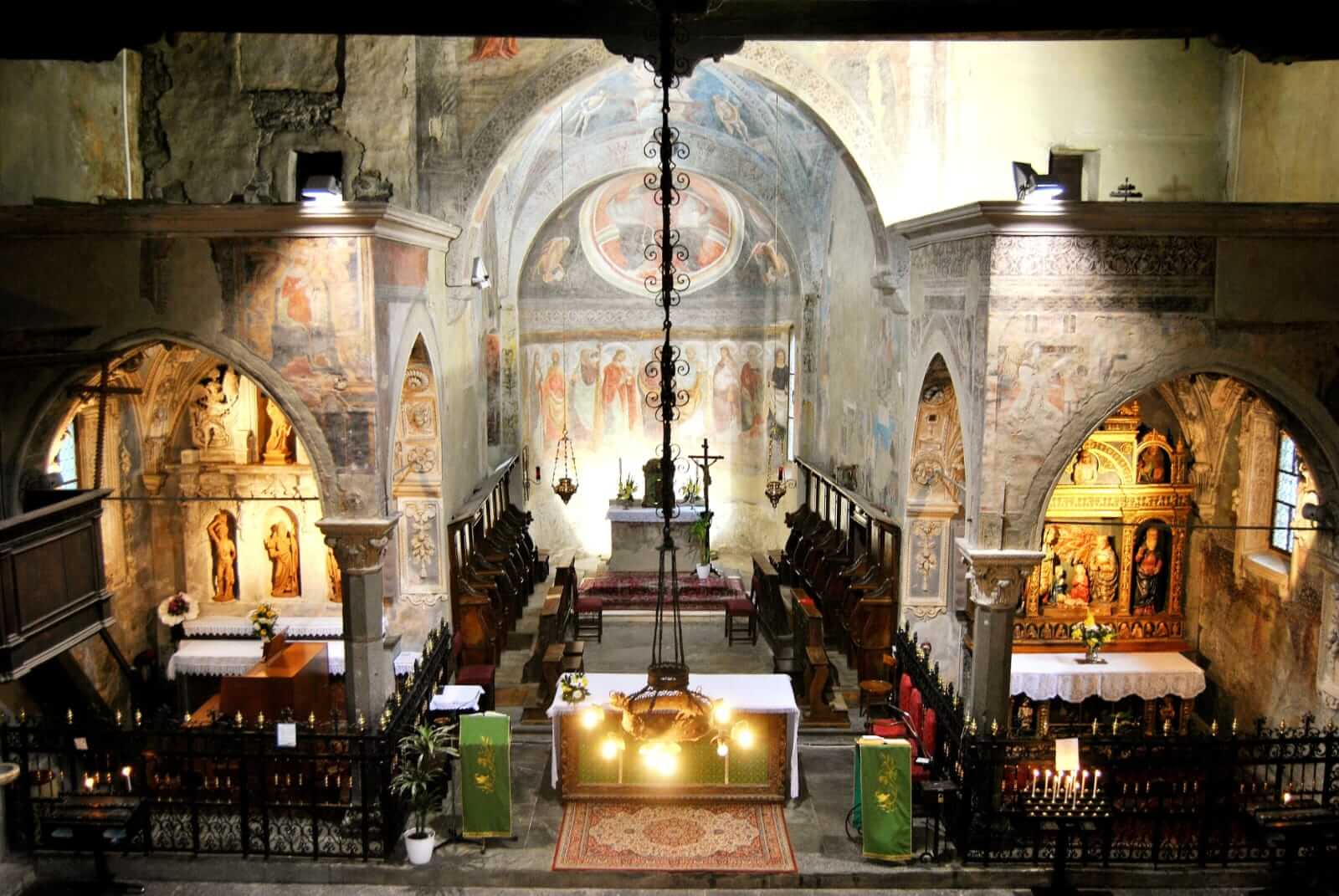 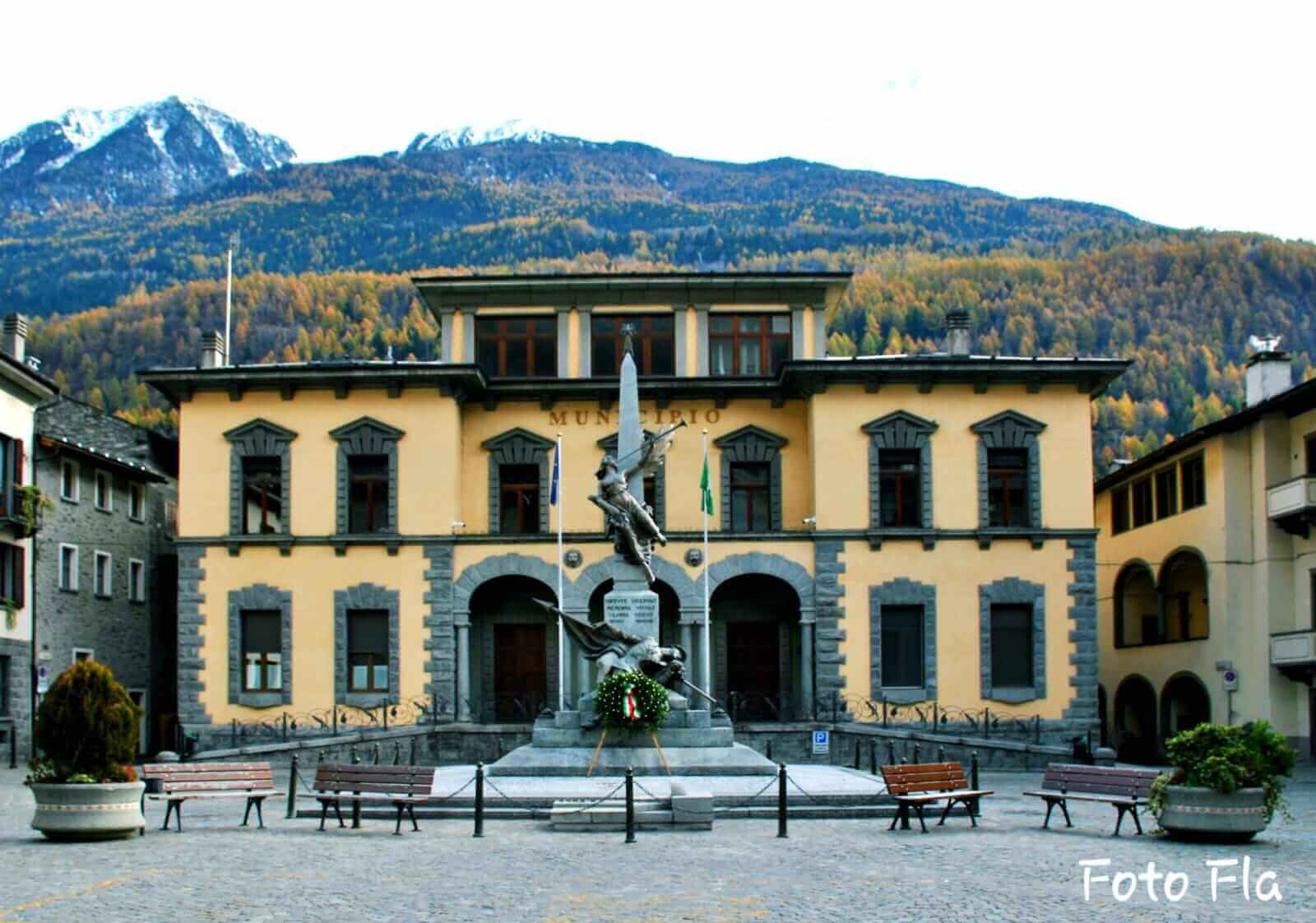 a few tens of meters, passing through a vaulted arcade you enter the Town Hall square where in the center stands the War Memorial among the most evocative of the Province, created by the architect Nicola Fiore in 1931. In the background the Town Hall built in 1928. This square still represents the nucleus of the social life of the town, still today a meeting place, a place of exchange, where local culture, curiosity and tradition come to life. It is well known and now a legend that in this square there is always someone to talk to at any time of day or night.

In recent years, walkways and trenches that were the second Italian defense line in the First World War have been rediscovered. The line crosses, with suggestive and often well-preserved testimonies, the municipal territory of Grosio, from one side of the valley to the other. The artifacts represent, as well as real history of fatigue and defense, excellent examples of engineering and construction skills.

Venuga, Ravoledo and Tiolo are three fractions of Grosio. Tiolo is located in the extreme north of the municipal area and borders on Sondalo. Going towards Tiolo you will find the crossroads that leads to the Mortirolo Pass made legendary by the Giro d'Italia and reachable by a comfortable and panoramic provincial road. In tiolo there is the Parish Church dedicated to the Visitation of Mary to Santa Elisabetta, an interesting example of religious architecture and containing some valuable works. On the other side of the Adda river is Vernuga, now urbanistically united to the town but once separated from the center by a large and lush countryside. There is the church of San Giovanni Battista and the ancient wine press, the last example of Alpine viticulture that found its last bastion in Grosio. Along the road that leads to Valgrosina, located at a higher altitude, is Ravoledo, perched on a large sunny hill. There are the ancient Church of San Gregorio and the Parish Church of Christ the King. Inside there is a large mosaic by Father Ivan Rupnik, a well-known modern artist of world renown. Further on, continuing towards Valgrosina, there is the ancient Town Hall and the first urban nucleus of the town with the church of San Giacomo, the first church of the parish. 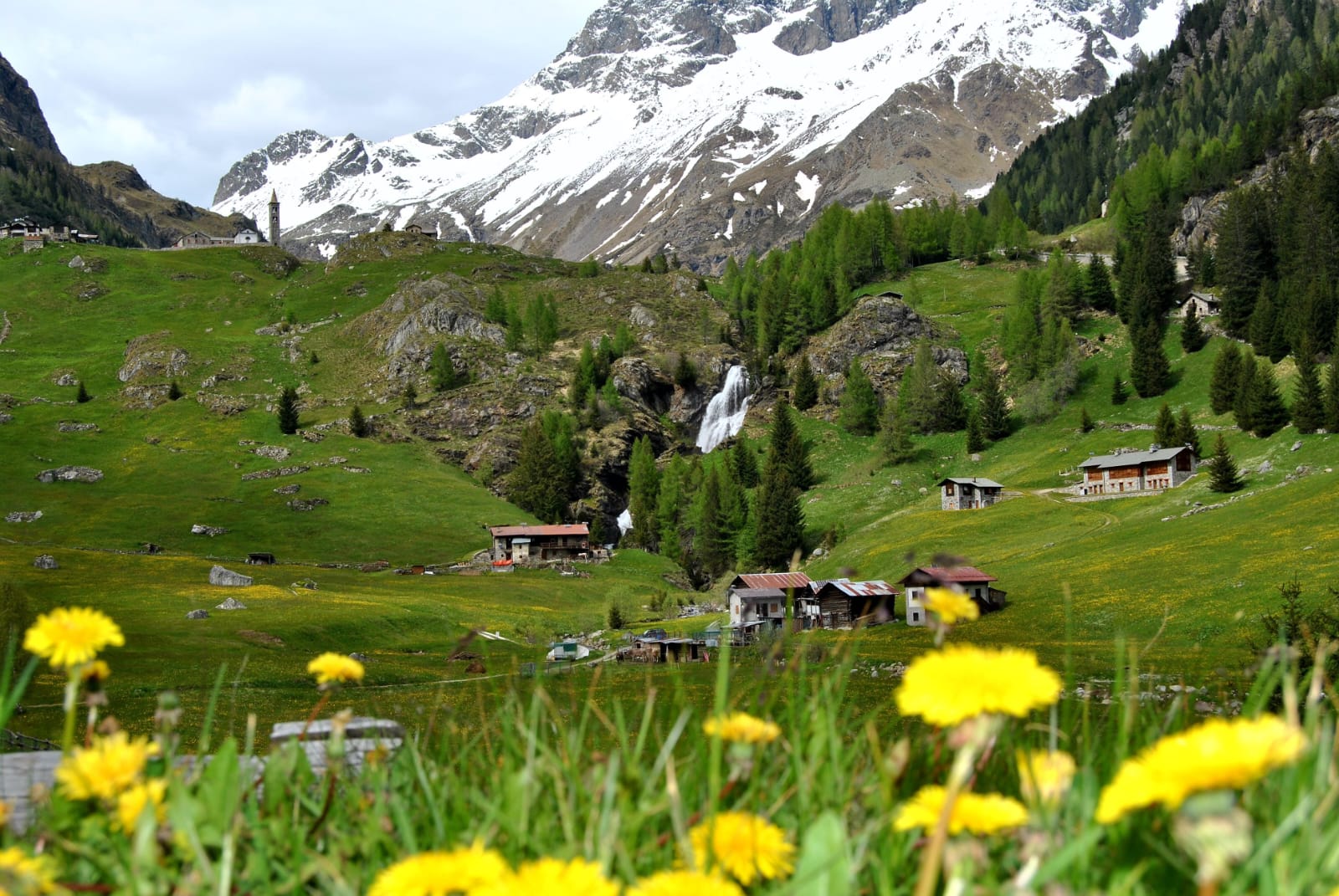 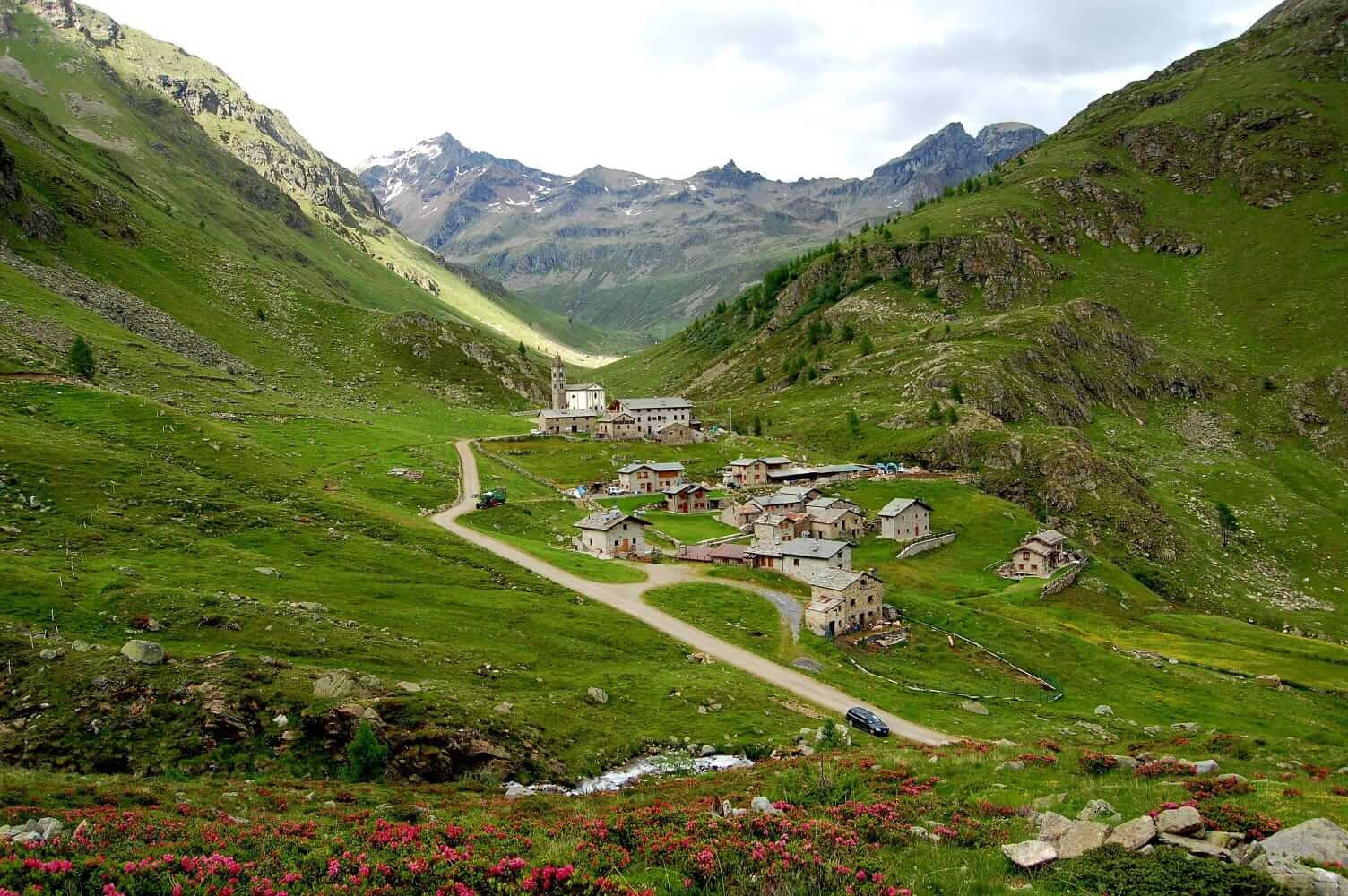 Located on the Rhaetian side, it is divided into two branches: the eastern one (Val d’Eita or Val de Scen) and the western one called Val di Sacco or Val de Dosa. Valgrosina is among the transversal valleys of Valtellina one of the few still lived and preserved in the agricultural-pastoral character. The care of the slopes and the beauty inherent in the territory make it unique, a must to visit especially on foot, offering excursion possibilities for all tastes and at all levels. In it there are scattered churches, shrines, chapels and many other examples of community life, devotion and rural attachment to the territory.The tradition of Faith is still alive especially in the frequentation of the Sanctuary of Maria Madre di Misericordia in Malghera Valdisacco, in the Church of the Madonna of Lourdes in the locality of Eita, the small church of Sant'Antonio in the locality of Biancadino and, right at the branch of the two named valleys, the Church of the Madonna Pellegrina in Fusino. In recent years, in the locality of Redasco, an evocative chapel has been built to commemorate the numerous missing Grosini and veterans from the Russian Campaign during the Second World War. 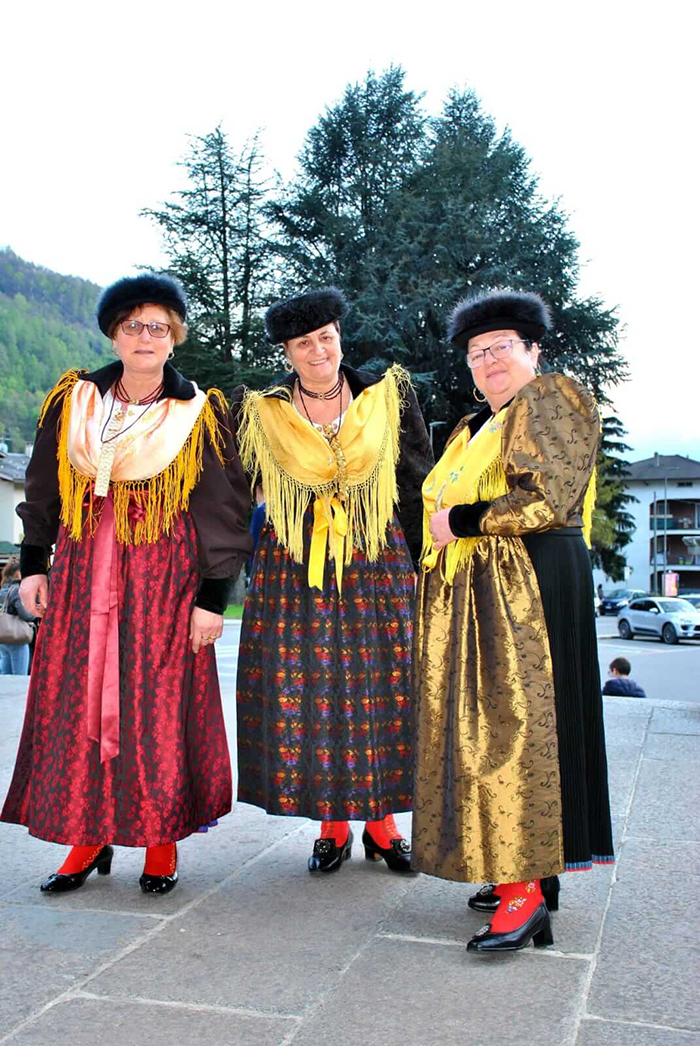 with its colors and the different occasions in which it is worn differently, some goldsmith products such as earrings exclusively produced locally and some gastronomic products among which the "Pesteda" reigns supreme Grosio further interesting to discover. 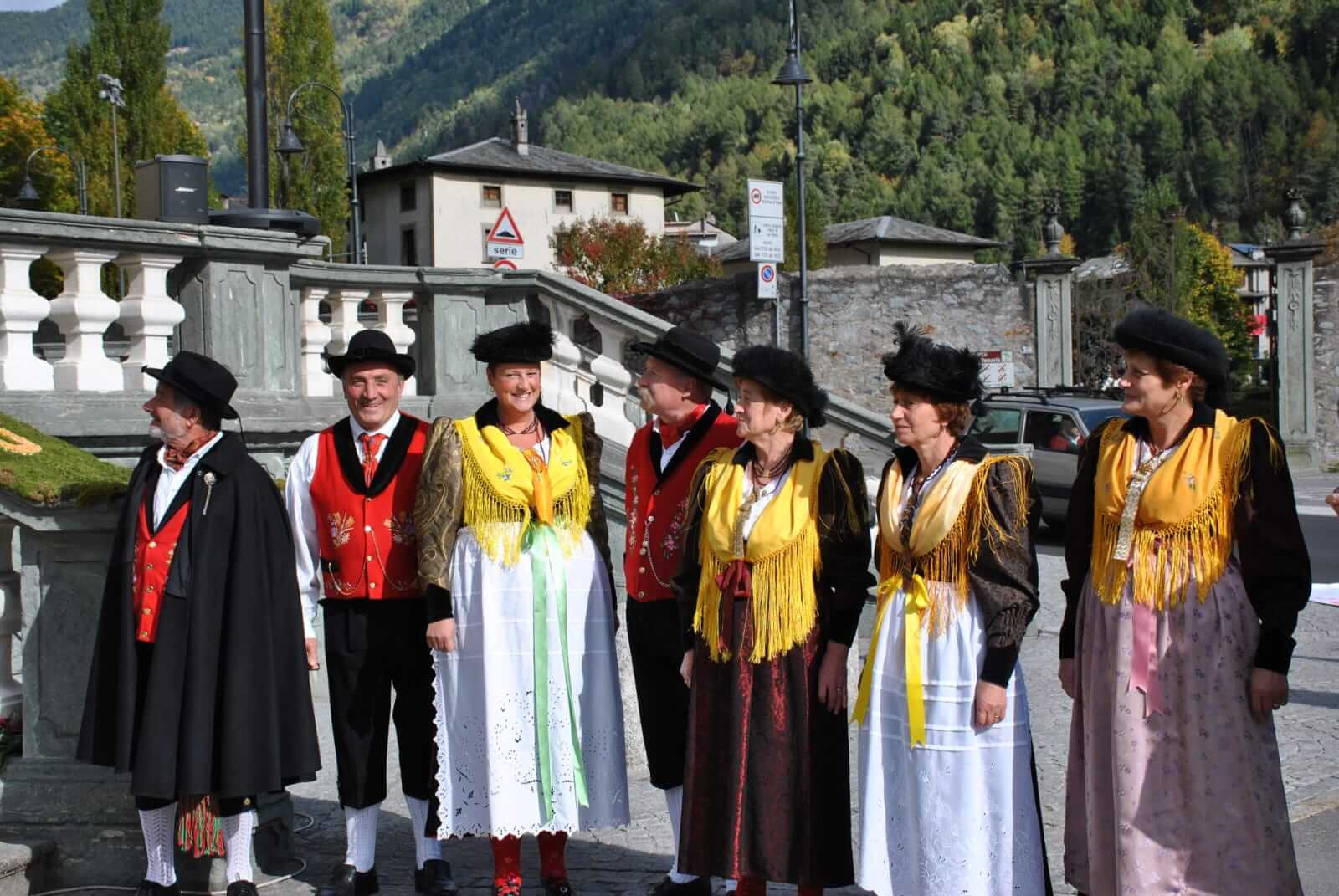 THE OLD MASKS OF THE CARNIVAL OF GROSIO 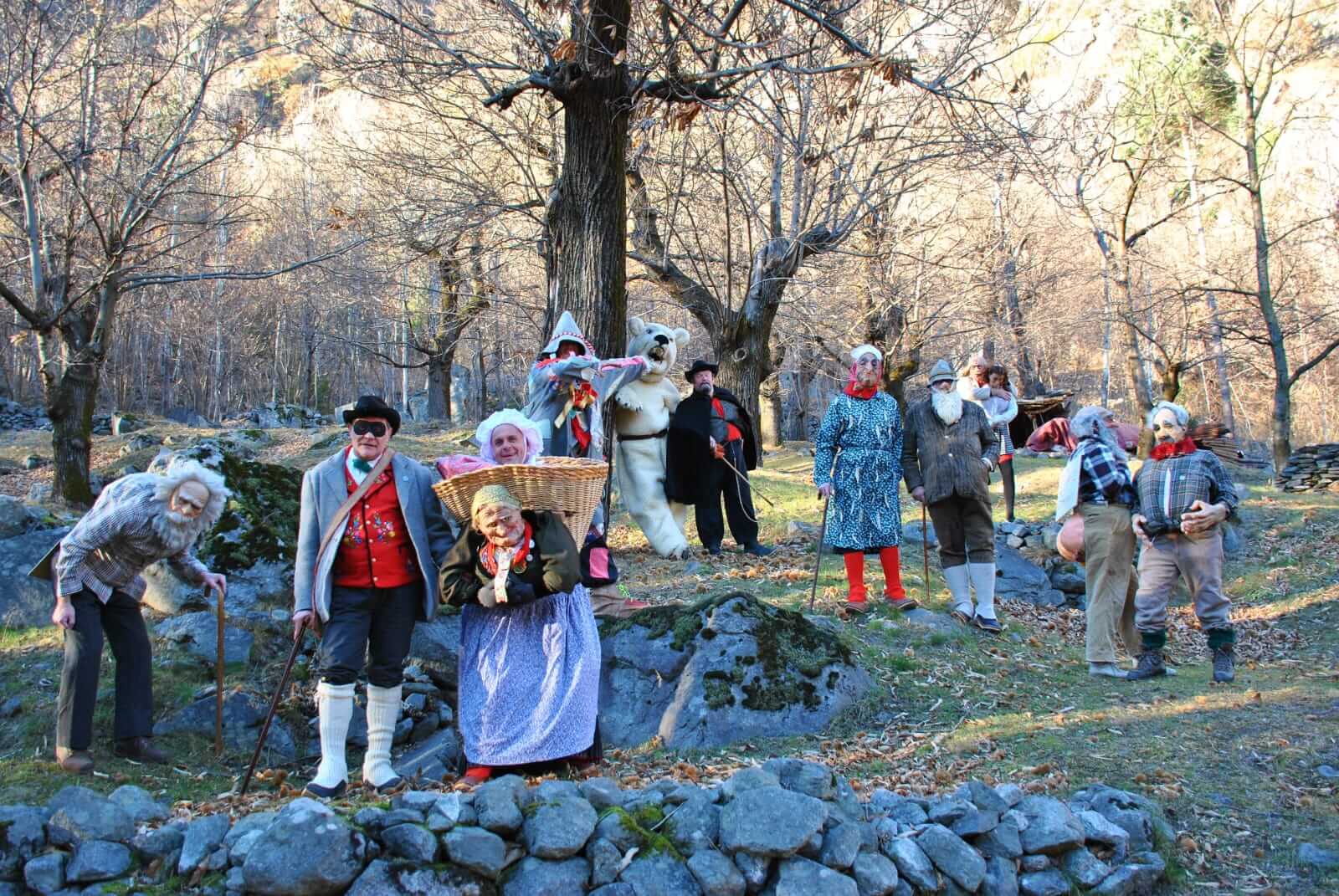 Grosio is known for his Old Masks (dating back to the end of 1500). On the first Sunday of Lent, the streets of the town are filled with colors thanks to the parade of floats and masks. The Carneval Vecc is characterized by the ancient Masks that lead the parade, they are characters who keep the goliardic and peasant vocation of the valley.

-the lean Lent and the Carneval vecc (The procession opens) & nbsp; With this representation the popular image of the aforementioned contrast between the sacrifice of time is immediately explained liturgical of Lent and the opulence of carnival. Thus the two tempos are represented by the peaceful, fat, cheerful and serene man and by the woman reduced to the bone, badly dressed, limping, shriveled and with an apron studded with foul-smelling salted herring.

-The bear and the tamer (overcoming fear with sympathy) & nbsp; The parade for the two characters is a succession of skits, calibrated by the skill of the tamer to let the big bear approach the crowd, loosening the chain and then pulling it at the right moment. At the same time, the bear must exploit the initial fear especially of curious children and be able, with grimaces and awkward movements, to transform it into sympathy for the animal.
This typical mechanism in place in all the ancient Alpine fairs served to mitigate exaggerated fears, making known the dangers of nature and its inhabitants closely.

-Il Paralitic (living on the shoulders of others) & nbsp; The first of the double masks, an ingenious mechanism coming from the ancient French theater, is that of the paralytic in which only one wearer gives life to two characters.
The upper part is that of an old sick man with motor difficulties, who uses a sweet young lady, dressed in a succinct way, to move around.
The wearer moves her by lending her long, tapered legs.
It is evident, however, that in the goliardic construction of the mask, the legs of the paralytic, which come out behind the wearer's tired back, are fake.

-The Bernarda and the Accompanist (the queen of Carneval Vecc) & nbsp; She is definitely the queen of the parade, double mask in which a wearer interprets the little son in the basket and the weary mother carrying it on her shoulders, another wearer accompanies the lady and her daughter in the role of husband. & nbsp; The grosina tradition is represented by clothing. In fact, the peasant costume, used during transhumance, is worn by husband and wife and the feet are shown "the waste" typical and unique footwear made of wood and leather has the toe raised from the ground, favoring the walk on steep and steep terrain. Grosio's tradition is also manifested in attitudes. It is the wife who carries the gerlo and therefore symbolically the weight of the family. Finally, the child who immediately becomes an adult and is weaned by his father with a bottle of good wine which obviously makes the little one joyful.

-l'Altoni (local harlequin) & nbsp; From the best tradition of agricultural societies which, even in entertainment, took care to contain expenses, is the mask of Altoni, made with the same concepts used by the most famous Harlequin. a pair of shoes of enormous size, a reason for clumsy trips, but also used to "stamp" the feet of famous victims during the parade.

-the cul de merda and the gubet de spin (the joke masks); & nbsp; are probably the most recent ones introduced in the fashion show. They most closely represent the relationship between carnival and joke. One represents and plays on the disgust generated by the bodily needs which in this case leave the character in a precarious hygienic state helped in the unpleasant operations by his partner. The other mask, on the other hand, takes advantage of the popular need for luck that can be obtained from a simple and effective pat on the hump of a victim. Only after the blow inflicted, the unsuspecting victim realizes, causes the pain, as the hump is formed by a pillow stuffed with the prickly curls of chestnuts. 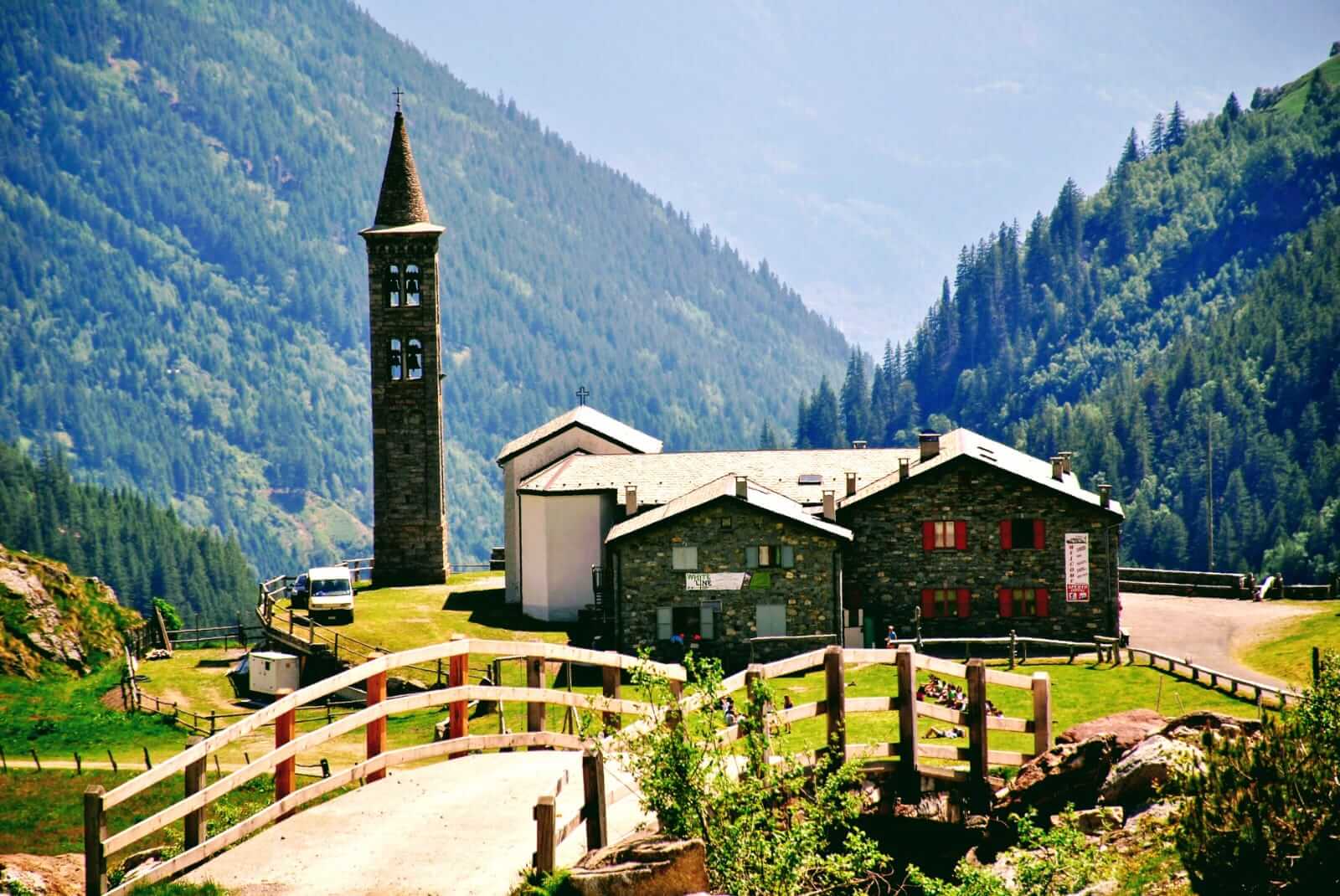 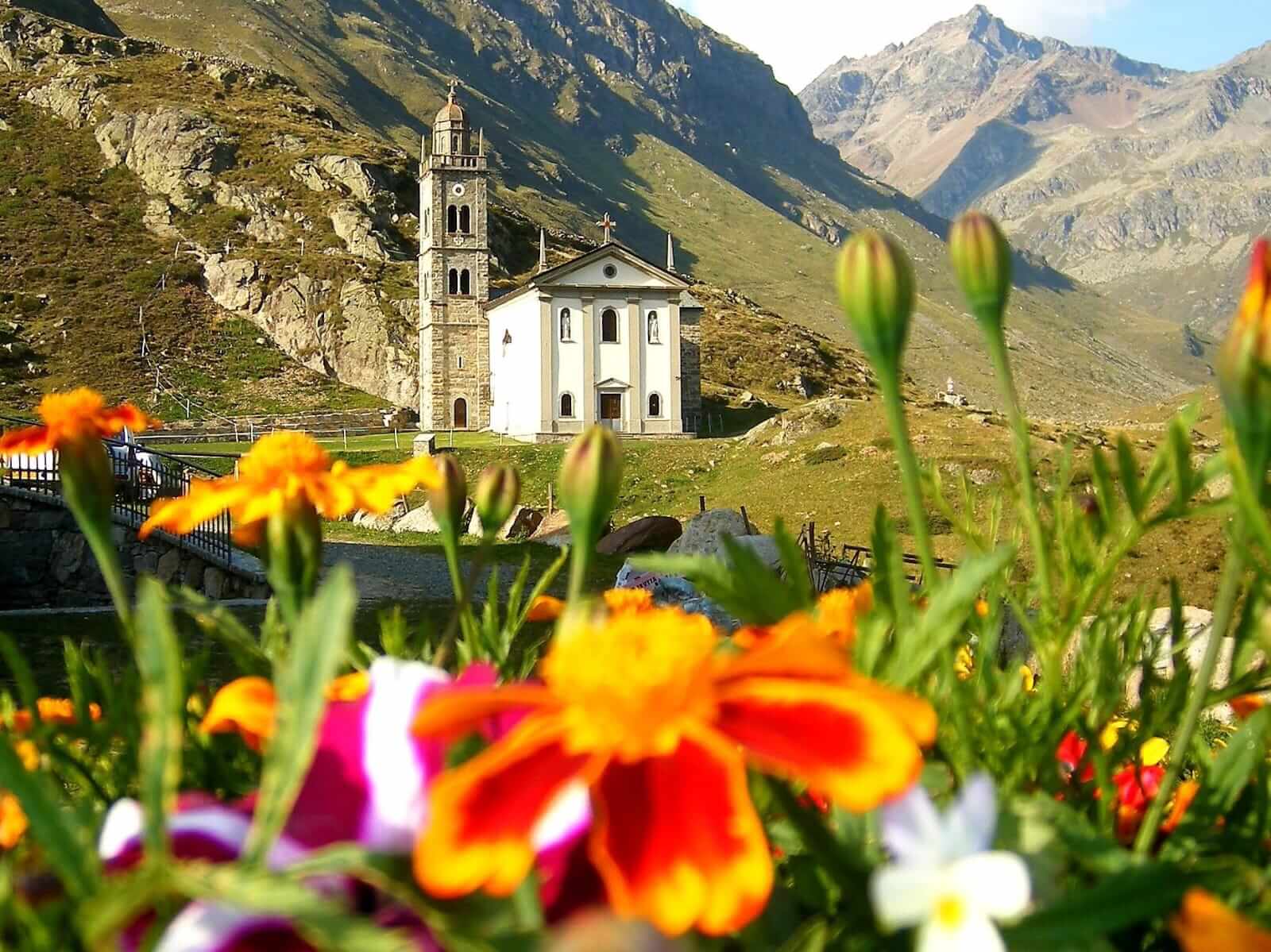 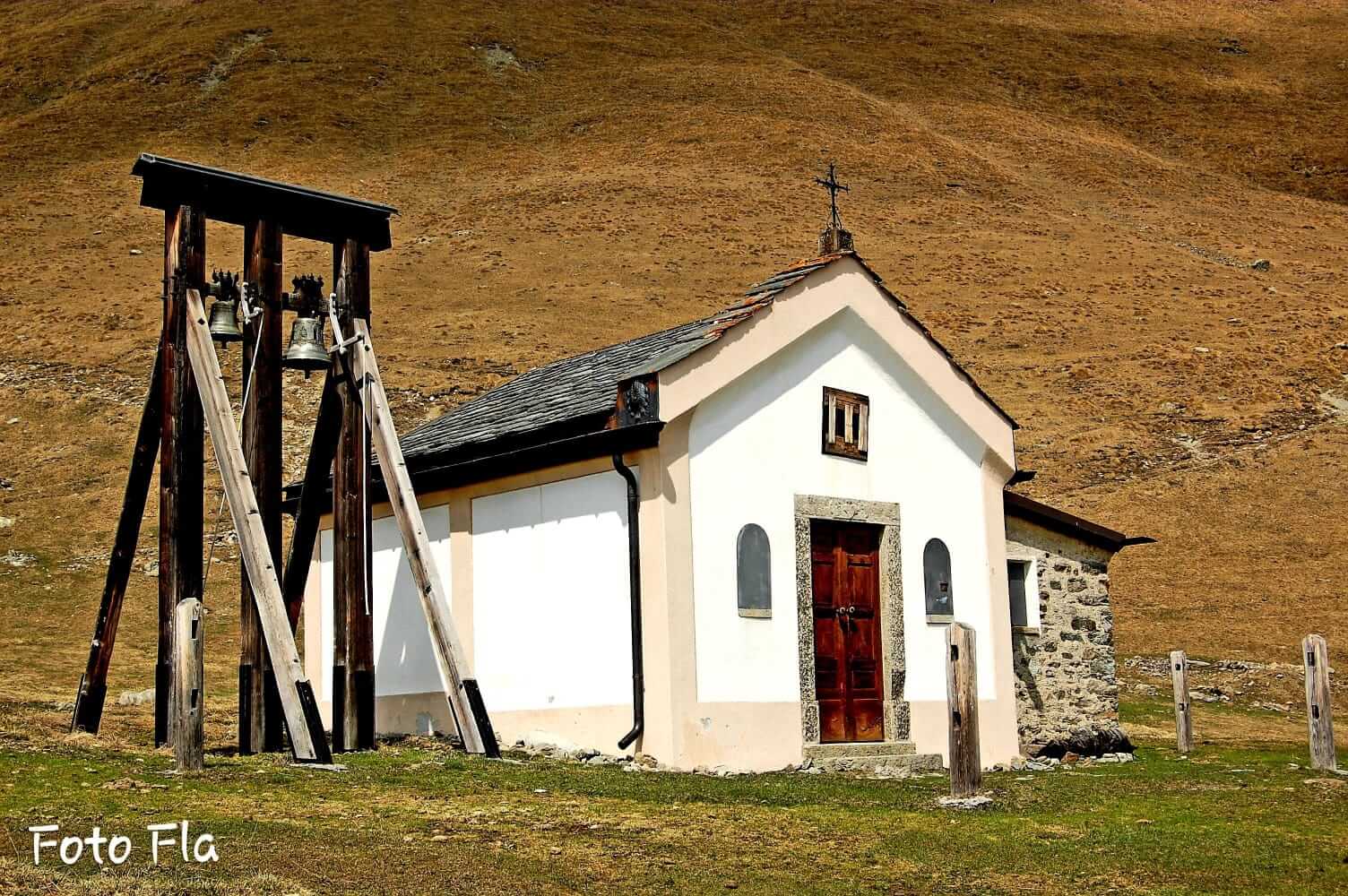 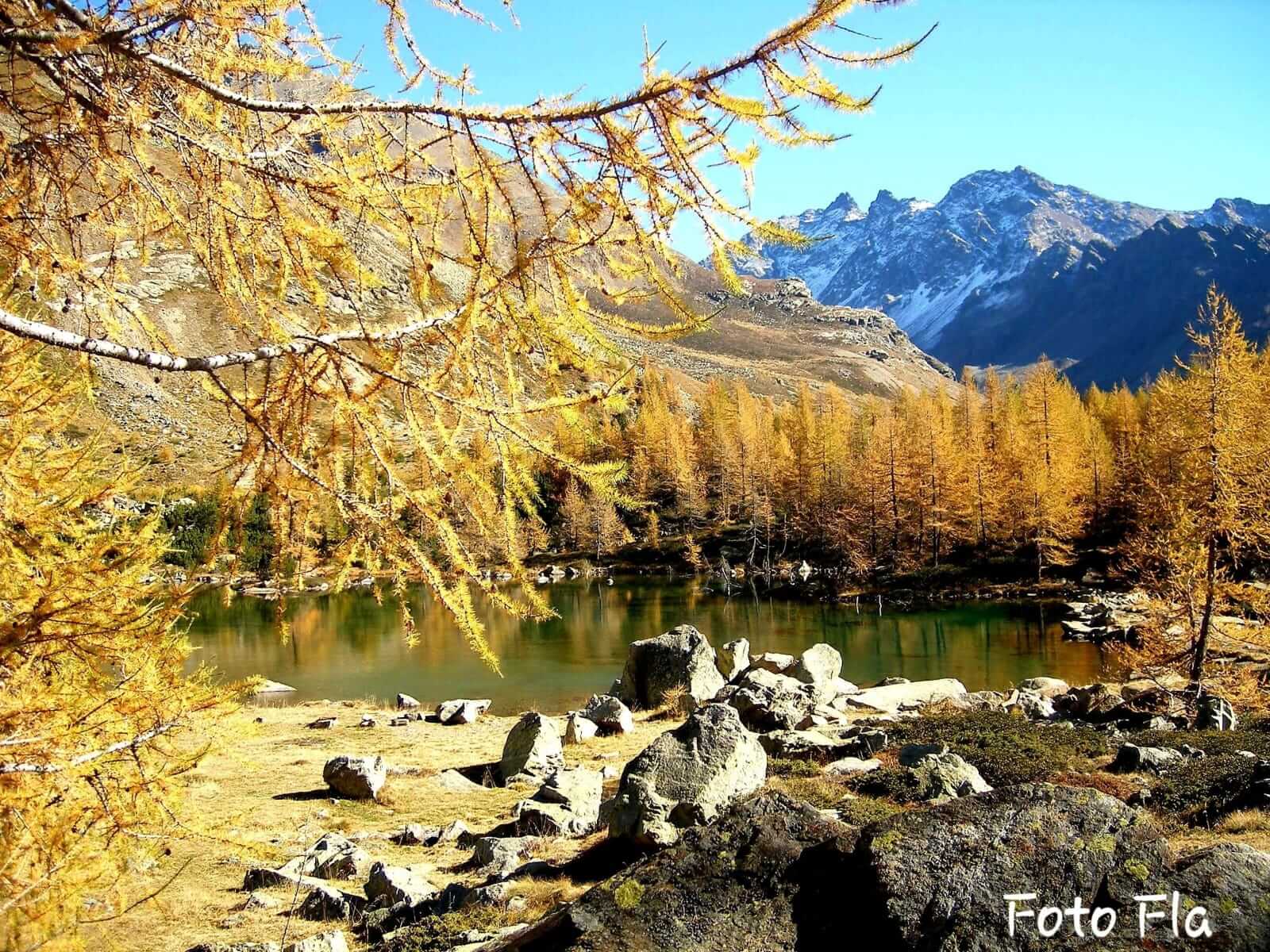 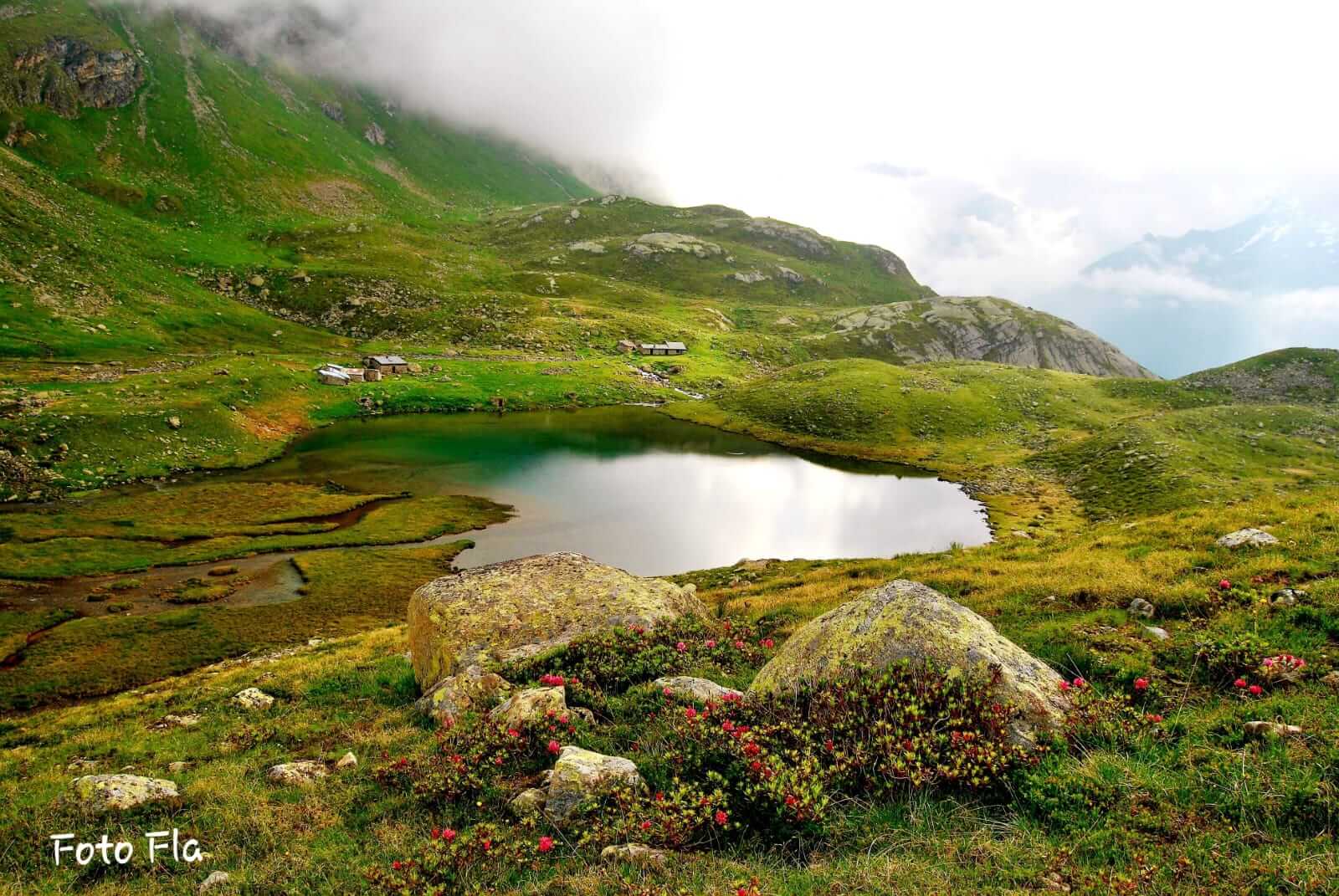 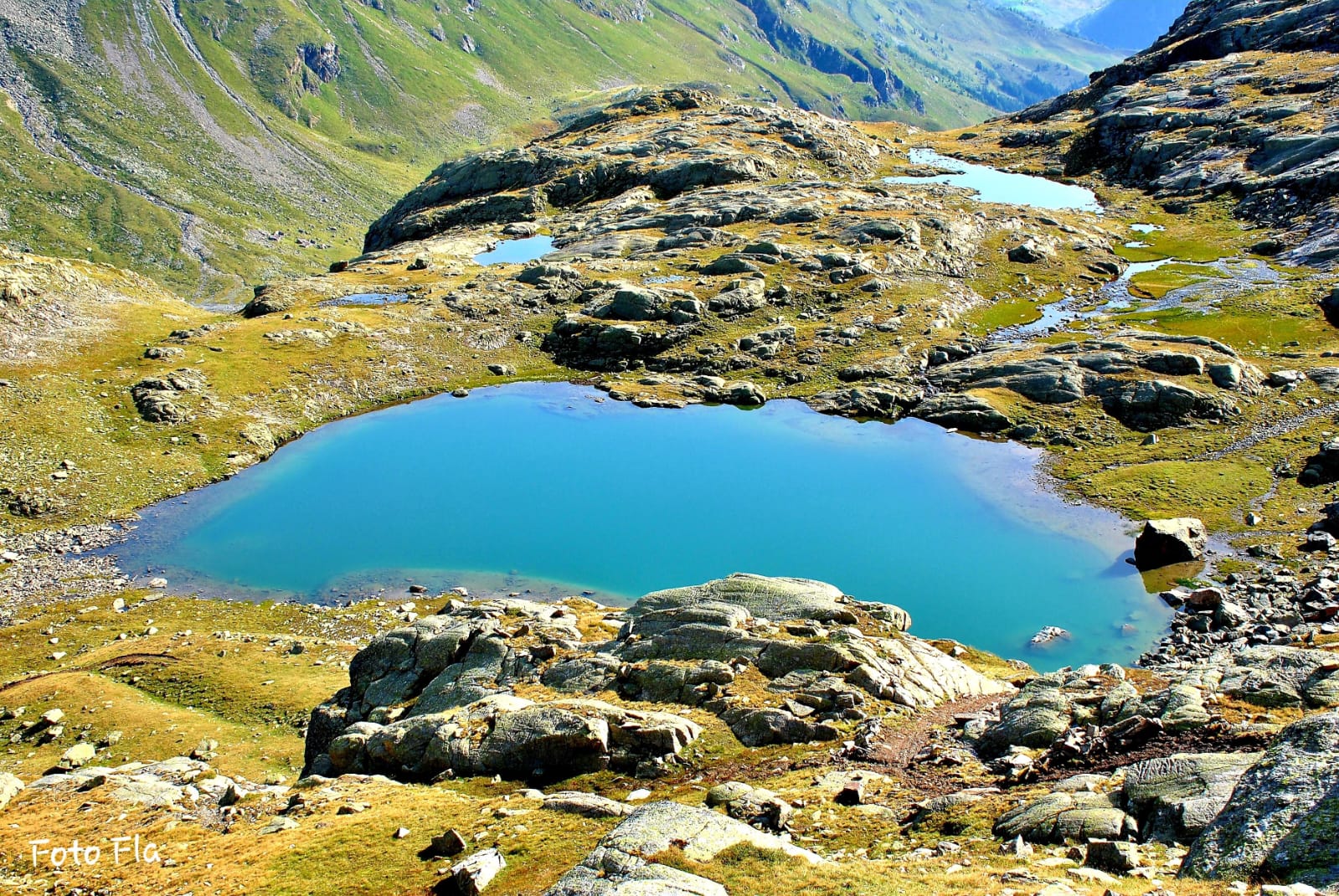 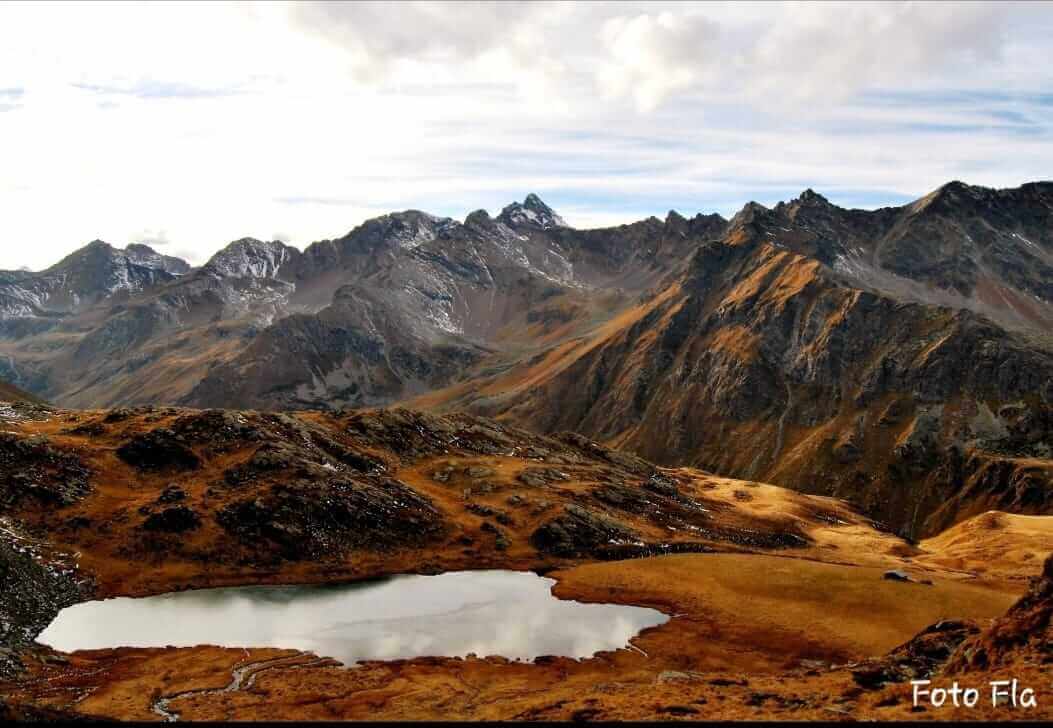 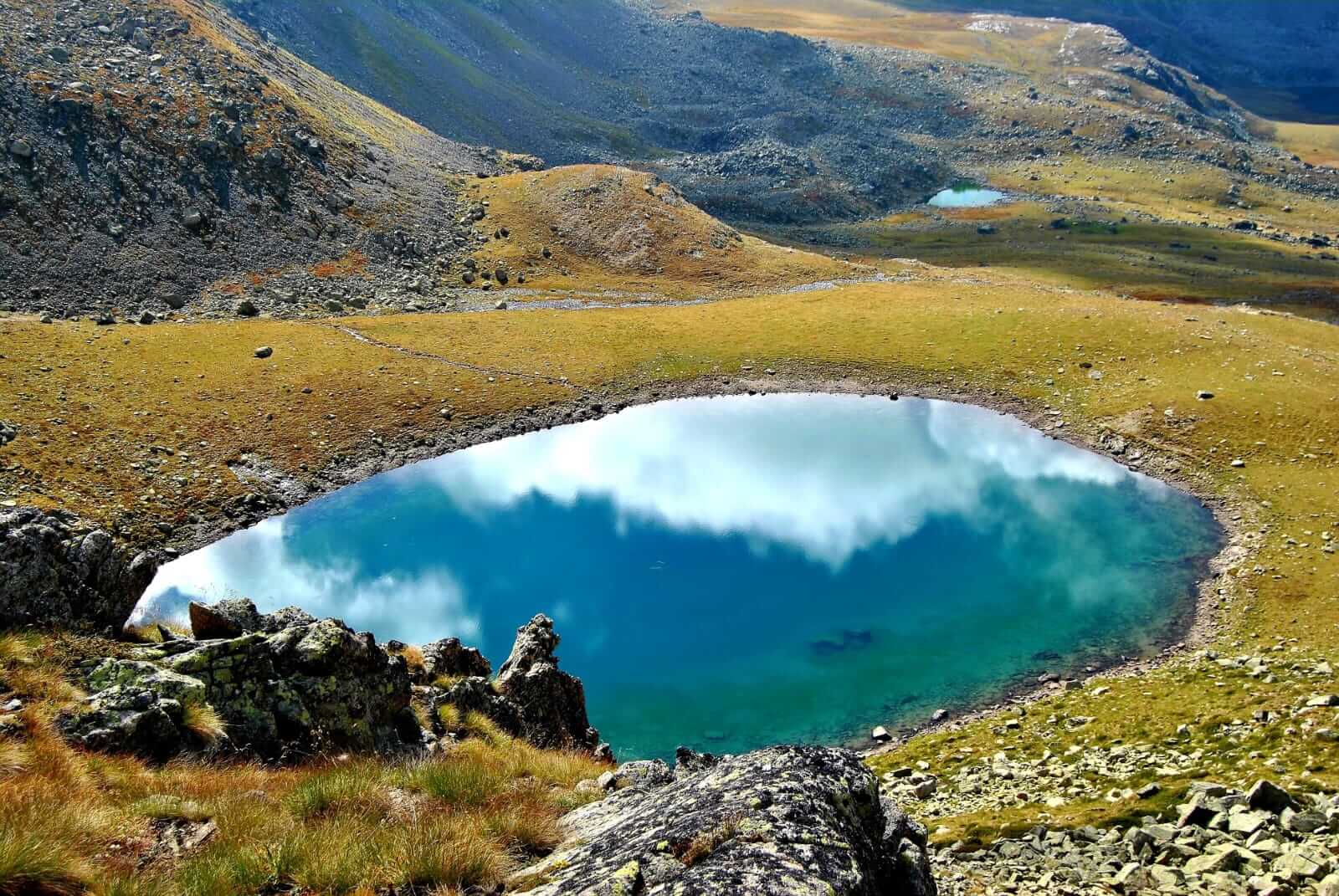 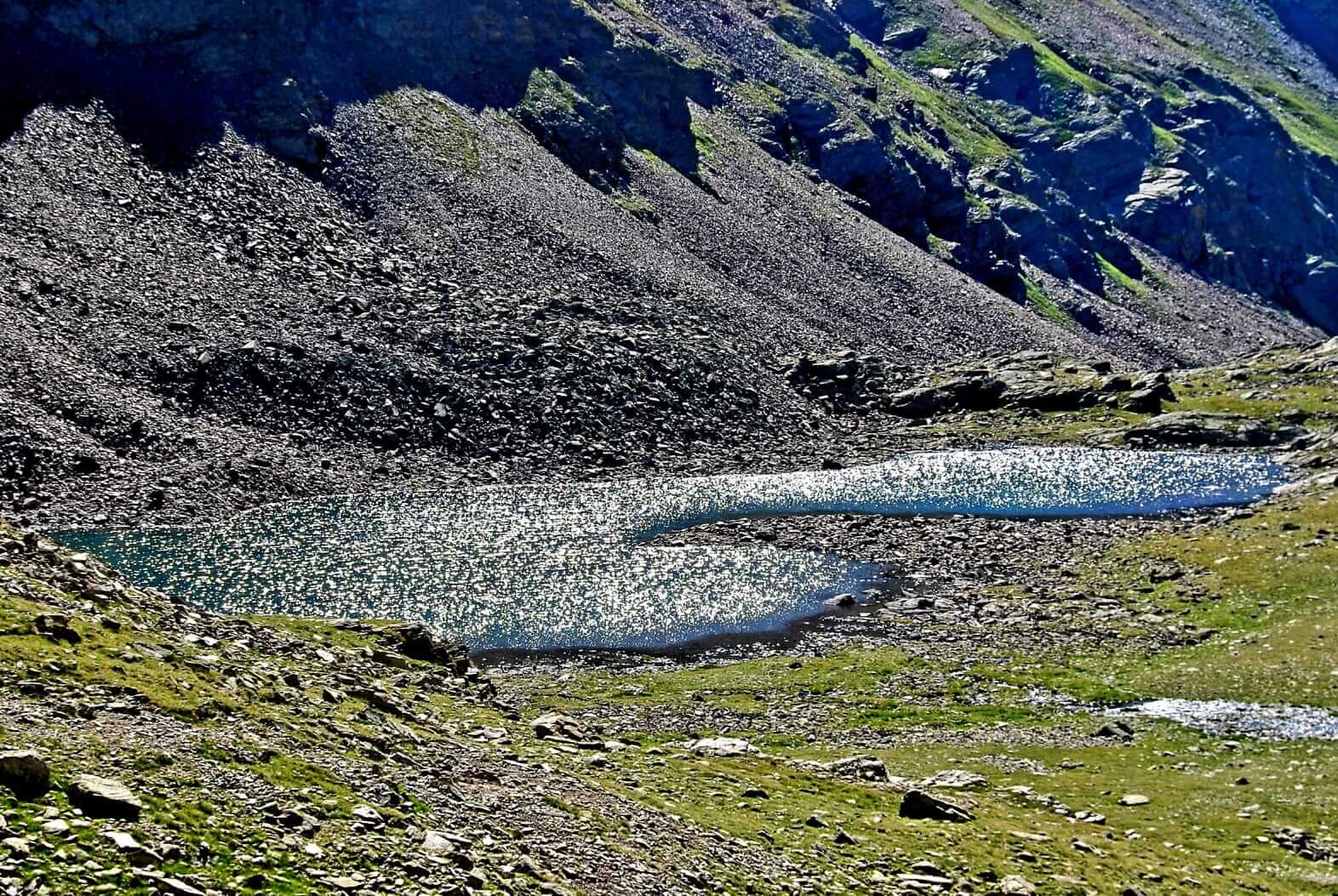 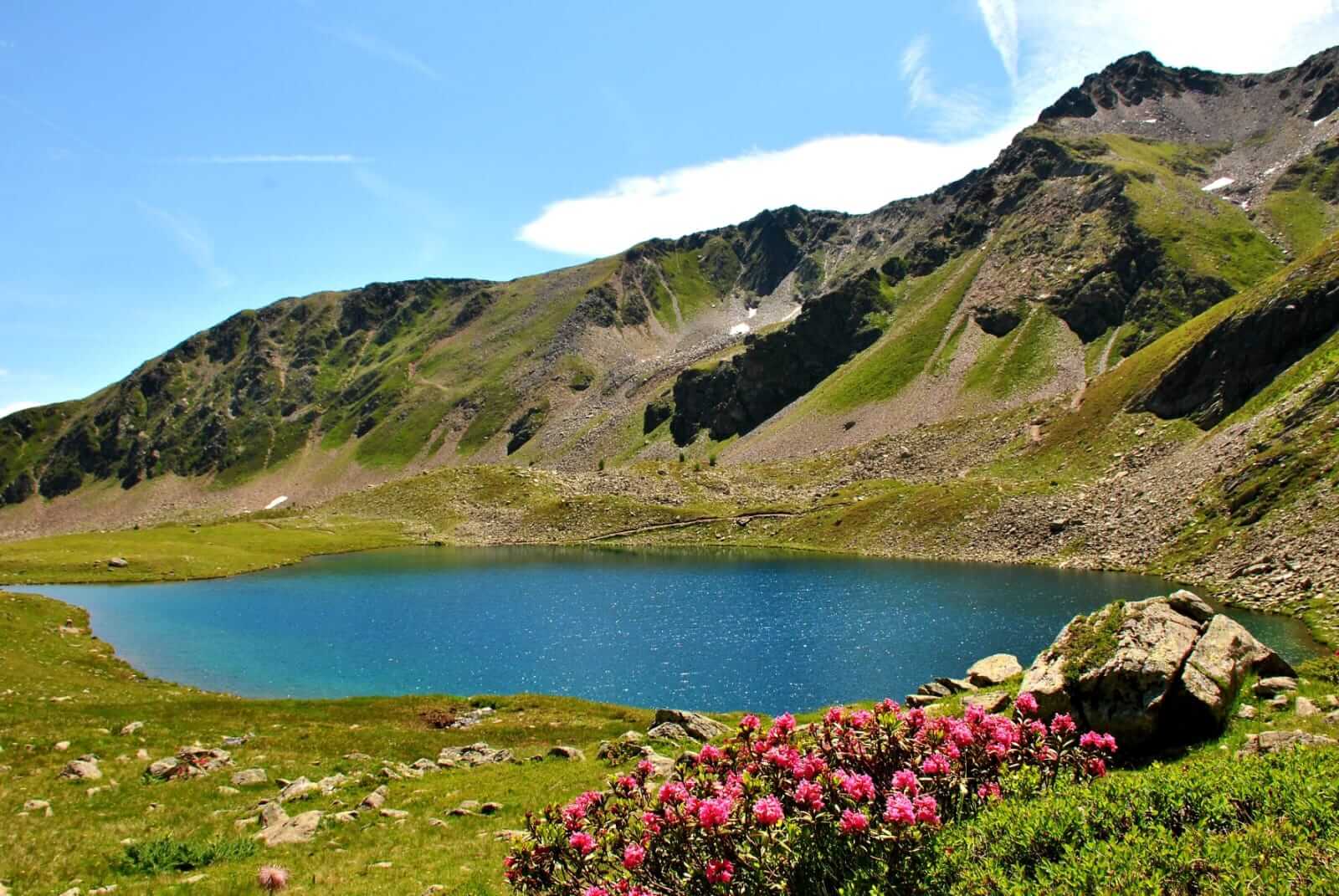 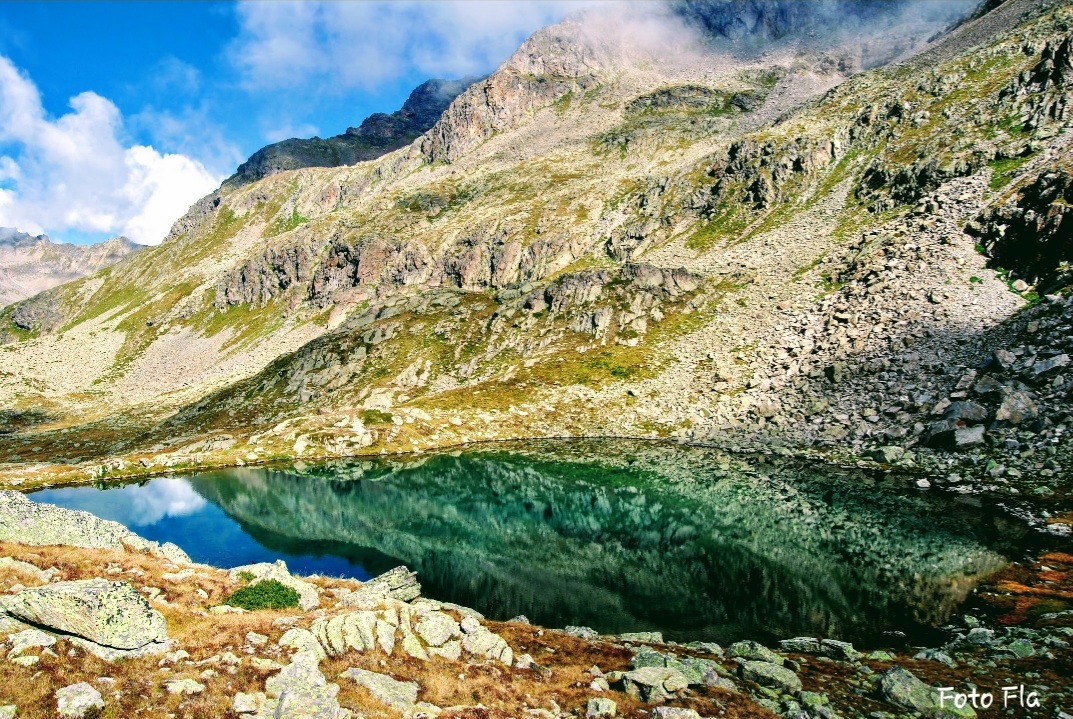